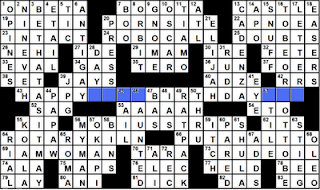 So this was a weird puzzle, and, as much as I think a theme should be self-explanatory, I have no idea if this one will make any sense to the solver.

Here's what's going on: There are anywhere from 1740024 to a countably infinite number of "correct" solutions to this puzzle. The one real theme answer, the central across, is a [Personalized greeting for someone celebrating another spin around the sun (4 squares for the number, 3 for the name)]. So HAPPY BIRTHDAY is certainly part of the answer, but what about the rest (see the blue squares above)? The entries that cross our mystery squares hold the answer: they loosely describe a set of possible "correct" grids, which are all of the form HAPPY{#}BIRTHDAY{@}, where {#} is a natural number in numeral-letter form occupying 4 squares and {@} is a 3-character string meant to represent a name (like on arcade game high-score lists). Some of the squares can be blank to accommodate shorter names and numbers. That's a bit of a mouthful, but an example should make things clear. A message to me on my next birthday might read:

HAPPY29THBIRTHDAY_PB (where _ is a space. P_B or PB_ would also work)

The possible entries for each "Schroedinger" square (although this term is something of a misnomer for higher-order entries of this type) are dictated by the crossing entries and the solver's discretion. The first square crosses DAY?. Note that both the word DAY alone and any day-number combination satisfy the clue, so you can have a blank square in the case of single-digit birthdays or the 10s digit otherwise. In fact, there isn't really a limit on how high that number could go, if you're willing to allow many digits in one square, thus allowing for ages beyond 99 (though DAY0 doesn't really make sense to me, so there is a lower limit. Again, your discretion). The next square must always be either a digit or any other character on a numpad (# or * for example, but then the answer wouldn't really make sense), but not blank.

The next 2 squares are even more constrained. The clue [Thing for hanging, maybe] could refer to TAIL, NAIL, RAIL, or SAIL, if you ask me. I suppose you could stretch it to include PAIL, but then the across answer wouldn't make sense. The clue [Frightened] could mean DAUNTED, TAUNTED, or HAUNTED. Clearly, then, these two squares can form ST, ND, RD, or TH, which are the only digrams you need for ordinal numbers. There are 8 other digrams that can be formed with SNRT and HTD, but again, those wouldn't make sense in the across answer. I intentionally crossed ?AIL and ?AUNTED with long answers, so that the remaining letters were unambiguous, since DAUNTED and SAIL or RAIL are trickier answers to their clues.

The last 3 squares can each contain a letter or nothing at all. In fact, based on the clue of the crossing answer (Shakespeare, monkeys,...), the 2nd of the 3 could be any character found on a typical keyboard (or even several characters). It's a bit of a clunky conceit, I know, but I put that answer in for yuks. I thought it was funny, anyway. I'm reminded of this classic Simpsons scene.