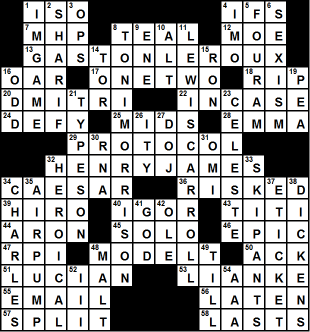 Five theme answers were all clued with simply a year:

The years, paired with the authors, each hint at a famous work of literature:

What do these have in common? Well, each one prominently features a character who is a ghost, making each of the writers in the puzzle a GHOSTWRITER, in a way, which is literally what I used to make this puzzle. It wasn't even my idea, in fact. Did you notice the date that the puzzle was posted, btw? Anyway, guess who it was. 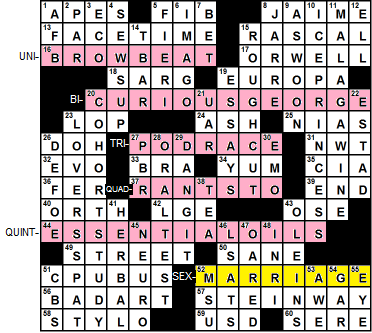 The idea here, hinted at by the title "ROMANtic FOREplay," is that the Latin prefixes UNI-, BI-, TRI-, QUAD-, and QUINT- can be preprended to the first words of the theme answers that are clued with their corresponding numerical prefixes. So, since 16-A was clued with a leading 1-, UNI- can be added to the answer to form the word UNIBROW. Similarly, BICURIOUS, TRIPOD, QUADRANTS, and QUINTESSENTIAL can be formed, in that order.

Now, given crossword conventions, 52-A, MARRIAGE, should be a theme answer but it isn't clued as one. However, if we continue the pattern, the next prefix that we would add would be SEX-, giving us SEX (before) MARRIAGE, a no-no for most Christians.


Anny Get Your Gun 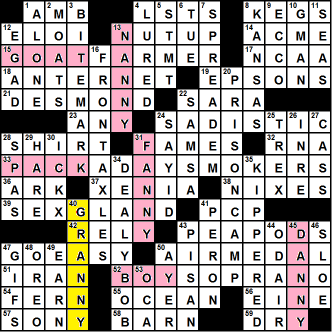 The grid for this one contains four entries that end in -anny: NANNY FANNY, DANNY, and GRANNY. Additionally, there are three (not entirely obvious) long theme answers: GOAT FARMER, PACK-A-DAY-SMOKERS, and BOY SOPRANO. In each case, the long theme answer is crossed by one of the -ANNY words, such that the -ANNY word can precede the first word of the long theme answer: NANNY GOAT, FANNY PACK, and DANNY BOY. You'll notice that GRANNY is not used. So, is there the name of a firearms manufacturer whose first word can follow GRANNY? Indeed: since GRANNY SMITH is a thing, SMITH & WESSON is the answer.

In week 1, I asked you to name the medical procedure hinted at by the puzzle. 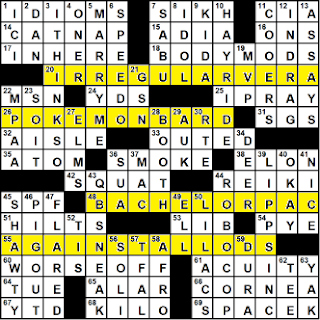 Let's take a look at the theme answers:


At first glance these fabricated phrases seem to have nothing in common. Let's take a closer look at them:


So, what do A, B, C, D, and DD suggest? The final member should be the give-away: bra cup sizes. Since the theme answers are formed by moving down one size (B->A, C->B, etc.), our answer must be a medical procedure that reduces one's cup size; thus, our answer is BREAST REDUCTION SURGERY.

A few solvers understood the trick, but interpreted it as suggesting BREAST AUGMENTATION. Although one could argue that the actual "direction" the cup sizes are moving is ambiguous (since you have to go up to form the real phrases from the theme answers), I did not accept that answer as the title "Dim the Headlights" should make it clear that there's a reduction involved. Note that I did accept variants such as REDUCTION MAMMOPLASTY and simply BREAST REDUCTION as these are synonymous with the correct answer. 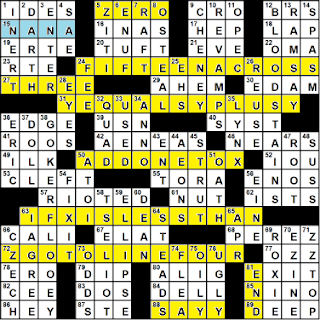 In week 2, I asked you for the name of a superhero. The title told you to "follow the directions." As you would have quickly noticed, the "directions" are presented in the form of a computer program written in pseudocode (although, to the best of my knowledge, the instruction set used in this puzzle comprises a Turing-complete language, as it allows for variable assignment (EQUALS) and conditional branching (IF and GOTO). This means that the function of any program, no matter how complex, can be emulated using only these instructions. Science!). Let's have a look at the program:

So, what does it do? Well, let's trace through it:

Although solving this meta required no actual foreknowledge of computer programming, the instructions given do actually constitute a somewhat legit and functional computer program (albeit in an invented language). Not surprisingly given the common interests of many hardcore cruciverbalists (hint: they're mostly a bunch of nerds), a number of solvers felt right at home in this puzzle, and, once the solving was over, some even went for extra credit (alas, the selection process was still random) by implementing the program in the language of their choice. Joel Berghoff whipped up this PHP program that you can view (along with the output) here. Brandon Hensley, a PhD student studying insterstellar dust grains at Princeton, took an unconvential route and implemented the program in Befunge. Befunge belongs to the class of so-called "esoteric" programming languages, which are sort of novelty languages that are created for illustrative or humorous (as opposed to practical) purposes. Fittingly, Befunge code is written not in 1-Dimensional lines of text but on a 2-D grid (technically a torus, as a program can wrap around on all sides). Rather than simply moving from left to right, a Befunge interpreter can move left, right, up, or down while interpreting a program. This is best illustrated by example: to see Brandon's program in action go here, paste the code below into the text window (under the "Clear Source" button), and hit "Run", "Creep", or "Step" to watch the interpreter do its thang.
(Make sure you preserve the line breaks and spacing when copying and pasting)

WEEK 3 - Take the Day Off and Get Stoned

I warned you that this one is pretty tough; indeed, just 8 out of 27 solvers submitted the correct answer. There were several steps in the path to the full solution in this one, but many solvers (including a few that got the correct answer) identified one or the other, but not both. Let's take a look:

In week 3, I asked you for a brand of alcohol, but there isn't really anything in the grid hinting at one. 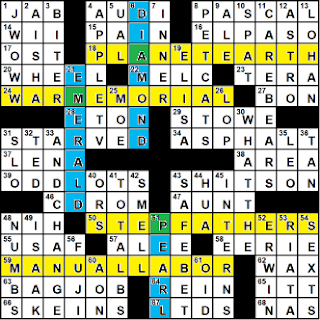 The theme answers are:


Most solvers noticed, with the help of "take the day off" in the title, that you can add DAY to the second word in each themer to get:


But, there's another operative word in the title: "stoned". Some of you also noticed that there are a few stones in the grid: DIAMOND, EMERALD, and PEARL (not technically a stone, but it is commonly referred to as a "gemstone" like the others). So what do these two components have to do with one another? This is the tricky part:

It seems that there is one stone missing, as nothing of use crosses MANUAL LABOR. The birthstone of September is SAPPHIRE, so our answer must be BOMBAY SAPPHIRE. *Actually, June has one of three birthstones, depending on who you talk to. Neither Moonstone nor Alexandrite was going to work in the grid, though, nor were any of the remaining single-stone months. However, although June has several birthstones, Pearl is only the birthstone of June, so it's unambiguous. Definitely tricky. Perhaps the solution path was too veiled for an answer that is not entirely unambiguous. Since SAPPHIRE is the only thing you find, could you be sure that you should make a leap to Bombay Sapphire rather than try to uncover another possible layer to the puzzle? Well, none of the solvers who wrote in said that they found it unfair, but then perhaps they were expecting a better answer than this. Not sure about this puzzle; plus, I was disappointed to have weeded out so many solvers before week 4, since I switched the difficulty around. My bad, still trying to get the hang of this meta business. 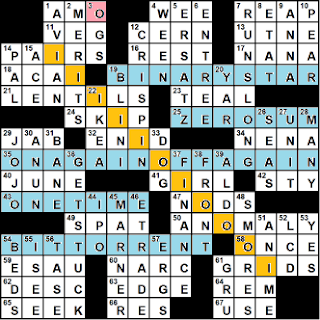 So just what in the seven hells is going on in those highlighted squares?
The theme answers are:
A fair few numbers in there, including one planted to throw you off ("two"). Didn't like having (0) in the clue for ZERO SUM and (1) in the clue for ONETIME at first, but I left them in as sort of another red herring, as the repetition itself is of no significance. Then what to make of the numbers in the parentheses? Looking at just the first words of the answers (or first word of each clause, in the case of the 4-word one), we've got BINARY, BIT, ON, OFF, ZERO, ONE, telling us we've got to think in the language of computation. Converting the numbers to binary and taking another look at the entry, we have:
Tricky, to be sure, and not perfect because you have to add leading zeros to two of the figures. However, this isn't really part of the solution path, only a hint in the right direction. If we take a good look at the grid, we see that, neglecting the theme answers and one blasted escapee, the only other Is and Os in the grid fall on the diagonal, running NW to SE (creating a "digital divide," as they literally partition the grid into two). Interpreting them as another binary number (using big-endian notation since that's what used in the clues. Big-endian means that the most significant digit comes first when reading left to right. Our familiar base-10 system is big-endian), we get 11111010001 = 2001.
At the intersection of "2001" and bits & bytes, I argue that we find none other than HAL 9000, a character of Arthur C. Clarke's 2001: A Space Odyssey and Kubrick's adaptation of the same name, which is our contest answer.
Now, as to that small but significant error. I had intended to have the only Is and Os in the grid be the ones in the themers and on the diagonal. Somehow, though, I missed an O right in 1-A, at the crossing of AMO and OGS (which isn't even good fill, or is at least quite tricky, as some solvers noted). The frustrating thing is that there are a number of perfectly legitimate alternative fills for that corner, which I know because I tried a bunch of them. I even prepared a special wordlist by removing all words containing I or O from my master list just so I wouldn't fall in love with an I/O answer while browsing and not notice it. I wasn't even in love with either AMO or OGS, so I don't know what happened there. Anyway, I don't think it's the end of the world, although I beat myself up about it for a few days. From the comments I've received from solvers (from both the correct and incorrect camps), nobody was thrown off by it (though a few noticed). However, my offer still stands: if you didn't submit HAL 9000 (or just HAL, or at least some indication that the computer from 2001 is your answer) because you were led off on a wild goose chase by the stray O, let me know and I'll figure something out. I won't pick a winner until the new puzzle goes up sometime early (like 1 or 2am) Tuesday morning.